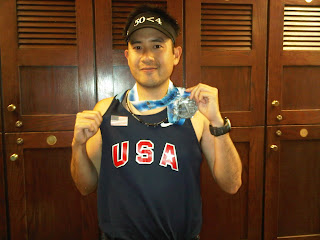 
Race Logistics
PVD is a nice small town, and we (Daiki, Jenny, & I) are enjoying our time up here. There are a lot of Italian and seafood restaurants. Thayer Street is a lively night time are with bars. There are clubs in downtown. I used to come up to here during college to visit my RISD friends Momoko and Daisuke. I was able to convince Daiki & Jenny to join me on this trip, last minute, because they have an affinity to this town, both having lived here.

I highly recommend staying at the Westin Providence (don't forget to earn your Starwoods points) on 1 W Exchange St in Downtown. It is connected to the Rhode Island Convention Center where the Marathon Expo is (the race has race day packet pick up from 6am with the race starting at 7:30am), and is next to Providence Place Mall. It is also a ridiculously close 2 min walk from the race start, so you can sleep in! Props to Jenny for securing a reservation here. The only drawback was that check-out was 12pm (even if you are a Starwoods member), but the hotel provided bag check and allowed you to shower in their fitness center for free (only if you stayed there, they will check).

The race shirts were pretty plain and white and ran large. I'm usually a large, but in this case, medium was my size. The race used b-tags, affixed at the back of the bibs, for its race chip timing. At the top of the bib is a post-race Narragansett Beer ticket, which our group didn't realize its purpose, and just tore off and disposed of. It simply said "Narragansett" and nothing else. There was a beer tent and food at the post-race festival in the park next to the start/finish, but the three of us just wanted to shower and grab lunch, so skipped the festival. Post-race, I learned that this was the 5th Annual Providence Marathon, but the race organizers, Cox Rhode Races (@coxrhoderaces) did not even mention that this was the big 5th year of the race, a definite missed opportunity. 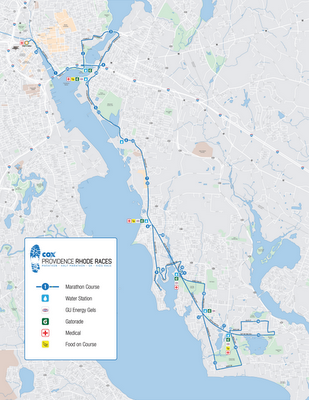 The mile markers on this course were way off. Some appeared early, like the Mile 18 marker. Others appeared late, like the Mile 25 marker. You definitely need to wear a GPS watch when running this race.

I beat my Kentucky Derby Marathon time from last week by 7 seconds, running my 3rd best time and 6th marathon in under 3:30. I was hoping for a sub-3:25, so am very happy with my results. I decided to run Providence in order to sub4 it (instead of attempting the Newport Marathon in Oct, which would have been the back end of a double). The last time I ran in Rhode Island was in 2010 at the Newport Marathon, and finished in 4:27:06.
I was initially registered for the USA Track & Field National 24 Hour Championships at North Coast 24 in Cleveland, OH with Jackie Choi, but withdrew, due to lack of ultra fitness. I am too conditioned to road marathons now. I also decided to cut back on travel these next couple of weeks, so did not opt to join Thunder or Becky at their Flying Pig Marathon in Cincinnati, OH.

As for the race, the weather was nice, starting off at a slightly cold 48F and rising to 65F. The course was hilly and tough, and was not that scenic (mainly suburban and through some parks along bike paths). We started in downtown PVD and quickly headed across the river east to the suburbs. The race started off overcast, and the sun did appear late in the race, making it a bit hot since the course was exposed, but became overcast again. During parts of the later half, we were running alongside live traffic, which is always unsettling.

Mile 24 involved crossing back over the Seekonk River along a bridge for I-195. I heard many complaints about the tight spacing for the running path for it. When I came across it, there weren't many of us there. I had no problems passing the 3 or 4 runners I encountered. I felt strong at that point. A runner in front of me and I almost went down the stairs for the bridge, but luckily a runner behind us warned us to take the ramp down. Those stairs would have messed up our race. You never want to take stairs during a marathon!
For RI, I would recommend the Amica Newport Marathon in Oct. It's a much prettier course, but even tougher than this one.

My fundraiser site for the charity just launched yesterday and can be viewed at:
https://philanthropy.mountsinai.org/kino

Thank you to those who provided moral support and especially to those who donated to my 9/11 10th Year Anniversary fundraiser last Sept! With your generosity, I was able to raise $5,550 for the program to provide FREE medical screenings and treatment for our 9/11 First Responders. This is particularly useful to those who are now ailing without medical insurance coverage!