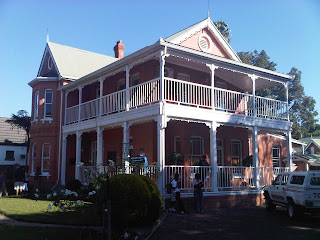 Live TV Coverage
Sun 6/3, 5:10am on SABC (national live coverage for the entirety of the race!!!)

Bus Tour
Today, the day before the race, we took the Course Preview Tour Bus from 8am on Sat. We made a stop at Comrades House (Museum). Lunch is provided along with a bottle of Energade.

Runner Tracker
http://www.comrades.com
My bib #: 17100 (C corral, for sub-3:40 marathoners)
For South African mobile phones only: Text the runner's bib # (race number) to 38132. It costs R10. One race number per SMS. You will receive 5 SMS messages with your runner's splits.

500 runners end up at the medical tent.
Only 1.5% of the field runs a negative split (called a "positive" split).

There are 8 corrals ("seeding batches"), letters A to H.

The "mile" markers were in KM to go, not KM run so far.

The 1st aid station doesn't appear until 4.8km, and the last one is at 86.2km (2.8km to the Finish). Most have its own corporate sponsor. The tables are 600m long, and are on avg 1.8km apart, with the closest being 1km apart, and the longest being 2.7km apart. There is aid everywhere! There were portable toilets are every station.

Reebok finisher's jackets are given only to those who finish the race in Reebok running sneakers. The race shirt given at the Expo is by Reebok, as is the hat given to the 1st 16,000 registrants.

NED Bank is a major sponsor, and sponsors many of the elite athletes. If you wear a non-NED Bank or official Comrades hat, are the only official branded head gear you are allowed to wear. The race marshals may ask you to remove it while on the course.

Bib must be worn on both the front and back of your jersey, not your shorts.